WHEN I worked in tsunami-hit areas around Sri Lanka's coastline earlier this year, I quickly learnt the politics of the tsunami. Sri Lanka and Banda Aceh in Indonesia represent the two worst-affected regions of Asia and both have been marred by civil conflict for many years. In the past, lax government efforts in the face of natural disaster have precipitated major turning points in the histories of several countries. For example, when East Pakistan was ravaged by a cyclone in 1970, the appalling response of the Pakistani government contributed significantly to the death of 300,000. Some estimates put it as high as 500,000. Either way, the chapter galvanised East Pakistani politics and brought Independence for Bangladesh soon after.

Despite the Ayn Rand foundation issuing a statement directly after the tsunami suggesting the "US Should Not Help Tsunami Victims", America thankfully embraced the tsunami as an opportunity to reach out to the most populous Muslim country in the world and build close ties with Jakarta.

Most of the world had not heard of Banda Aceh before the Sumatran region bore the full brunt of the huge earthquake's wake. Gerakan Aceh Merdeka (the Aceh Freedom Movement) had been fighting for independence from Indonesia for some time and Aceh was home to dangerous armed militia alongside religious fundamentalists. Many predicted the story of East Pakistan may be repeated - if Aceh separatists considered the government's response even slightly below par, they would step up their freedom fight. A friend flew out to Aceh with the WHO straight after the tsunami and called me. I was told how disorganised the relief effort was, massive areas were completely untouched by the military or foreign aid. I feared the worst.

I was proved wrong and in fact a peace agreement was later signed.

It is interesting to recall how Indonesia won its own independence from the Dutch as it echoes that of Bangladesh. The fight gathered steam after Krakatoa exploded in 1883. But post-tsunami, the credit must first go to the freedom fighters as they almost unanimously laid down their arms. The destruction had simply been too great. Both sides acknowledged that nothing short of complete cooperation would allow effective rebuilding of millions of square miles that had been flattened. GAM have handed in a large amount of their arms and the government has also felt able to withdraw many of its troops from Aceh. 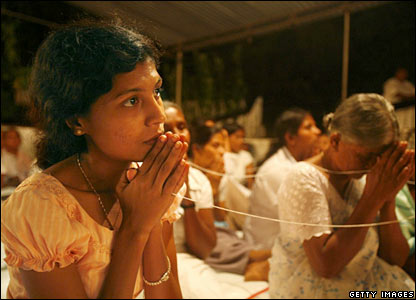 Most are probably more familiar with the troubles that had dogged Sri Lanka for decades. However it is incorrect to think of Sri Lanka as a land simply divided into Tamil and Sinhala communities. A sizeable minority (about 7%) are Muslim and think of themselves as quite separate to both the Sinhala and Tamil groups, I learnt. Kalmunai was ground zero, where about 15,000 perished. It's a predominantly Muslim fishing town and during my time there I met only two other foreign charities working in the area. When I went to Galle and Matara, both Sinhala areas, I could not move for Westerners. The Muslims in the east and the Tamils in the north/north east felt forgotten.

Whilst entirely anecdotal, the difference was stark. Friends who worked in LTTE-administered areas reported a similar dearth of foreigners, but wondered whether this was government-dictated or a result of the overzealous Tamil border guards who seemed reluctant to let anyone in. I know of several aid convoys that were stopped by Tamil soldiers, only for them to confiscate the supplies and turn the trucks around. Whether the soldiers distributed the aid is speculation, but it was apparent that suspicion was rife.

These stories were somewhat indicative of what happened in Sri Lanka following the tsunami.

The Supreme Court in Sri Lanka issued a verdict that as the LTTE (Tamil Tigers) were not state-recognised or authorised, they could play no part in rebuilding. Thus Tamil areas were left to the Tigers and NGOs, which, as you have already heard, were thin on the ground. Tamil associates were quick to sing the praises of the ultra-efficient Tigers, but in reality the aid distribution has been very lop-sided. Tamils who held the view that the Sinhala majority don't care for them have only had the impression strengthened.

However, voluntary groups from Sri Lanka have been instrumental in picking up where the government failed. The huge pandemics predicted never materialised due to the unstoppable efforts of Sri Lankan healthcare workers. Volunteers worked all over the island and none that I met cared whether they were treating or building a home for a Tamil or Sinhala family.

Little changed further down the line. The ceasefire held. However the recent election of Mahinda Rajapakse, thought of as a hardliner, surprised some - but he provided a second surprise when he offered peace talks with the Tamil Tigers. Perhaps the cloud does have a silver lining after all.

9 months ago, I wrote the article below focussing more specifically on Kalmunai and the problems I found in Sri Lanka. It was published in the May issue of Medical Student.


IT'S NOT GETTING ANY EASIER

ON a balmy March evening three Brits jump out of their auto-rickshaw outside the Sea Breeze restaurant. The two medical students and an SHO are looking for dinner in a small village on the outskirts of Kalmunai. It’s the most business the Sea Breeze has seen for a while.

Kalmunai, on Sri Lanka’s east coast, was ground zero several weeks ago. An estimated 15,000 died in and around the area, almost half of Sri Lanka’s entire death toll. Now the residents are wondering whether life can ever be normal again. The Sea Breeze stands alone - one of a very few buildings left erect in this once bustling Muslim village. Despite losing much of its staff and its chef, it has become something of a congregation point for survivors, many of whom are homeless. An ebullient fisherman, Shri Skandarajah, or Shri Master as he is known, sits with a cola and explains how bouncing back from the tsunami is being made very difficult.

Kalmunai is a predominantly Muslim and Tamil region of Sri Lanka. The country’s complicated demographic roughly breaks down into two main ethnic groups, the Sinhala and the Tamils. The long and bitter struggle between the Sinhala government and the Tamil Tigers has been covered worldwide, but a sizeable minority of Sri Lankans have been overlooked. Muslims make up approximately 7% of the population and most are concentrated on the East coast. International aid has poured into Sri Lanka since the start of the year, but the government has made sure that the distribution has been far from even. Food supplies due for Tamil or Muslim regions have been diverted or confiscated by government soldiers. Charity workers have been directed to Sinhala areas of the coast and all sorts of numbers have been fiddled.

Shri Master recently became something of a local celebrity as he was the man who discovered Baby 81 - the six week old boy found in a pile of rubble. A huge media furore ensued as nine families claimed parentage of the child. Shri Master explains that Tamil and Muslim areas have received far less help than Sinhala areas, “Go to Galle [a Sinhala city on the south coast], there are many charities and NGOs there, how many can you see here?”

Relief workers are thin on the ground. A religious group of British Sri Sathya Sai Baba devotees and an American charity called Safe Harbor are the only volunteers to visit several camps in the Kalmunai area for weeks. Sitting alongside Shri Master in the Sea Breeze is Aqeel, an English teacher.

“The Tamils have got far less help than the Sinhala, this is true, but the Tamils have the LTTE to do something about it. Who do Muslims have to fight for them?”

A large portion of northern Sri Lanka is controlled by the LTTE, the Liberation Tigers of Tamil Eelam. The Tigers’ army personnel has played an important role in administering aid to victims along the LTTE-controlled coastline. Kalmunai does not fall within this region. Muslims seem to have become the forgotten minority in the wake of the wave. The large Tamil population in places like London have ensured that the plight of Tamil Sri Lankans has been reported in the Western press. The government has been roundly criticised, whether this had any effect it is hard to say. As a small number of Sri Lankan Muslims live outside the country, their problems are not so high profile. 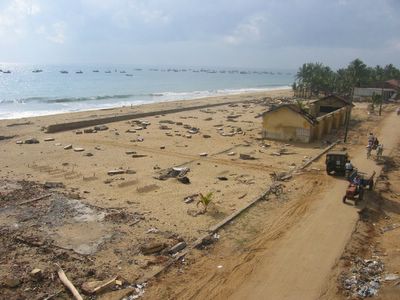 Despite all of this, the mood on the east coast is surprisingly upbeat. Shri Master, Aqeel, the staff at the Sea Breeze and the whole town of Kalmunai are determined. Aqeel explains, “Tamil, Muslim - you’re used to not getting anything from the government, no help. So when the tsunami came, we will rebuild all ourselves.”

Health is also far better than expected; there have been no epidemics - largely due to local doctors and healthcare workers taking all the right precautions. Most of the medical problems seen by the doctors in the Sri Sathya Sai group are not major, and often a legacy of the civil war between the Tamil Tigers and the government, as opposed to the tsunami. Some children are malnourished, many have lice and fungal dermatalogical complaints are rife. Scabies, TB and hepatitis are encountered on a regular, but infrequent basis. Psychological trauma is not to be underestimated and the group have brought counsellors with them. Many people have not returned to their homes and a fair amount of those that have will only sleep inland. There is widespread panic on the 28th of March when an earthquake hits Indonesia once again, despite no tsunami being reported.

Shri Master is right, Galle is a very different story. A major city, Galle is a tourist hotspot, as is most of the coast from here to Colombo, the capital. Walking through the Dutch Fort, one encounters almost as many foreign faces as local. Art galleries and hotel lobbies have been converted into tsunami aid headquarters. A representative from a charity called Project Galle rattled off a long list of the NGOs in the area. Driving along the Galle Road, which runs along the coast, one can see them all: The Red Cross, Oxfam, MSF, Japanese, British, Indian, Australian and American charities, religious charities, the UN and many more. It’s a very inspiring sight to see the international community rallying together to help. However one does notice a stark contrast between the south and the east. An Australian aid worker comments on how many of the residents have become so accustomed to handouts they have lost the motivation to rebuild their houses or look for work. She remarks that many children have learnt a new English phrase “I am tsunami, give me money.”

An hour’s worth of rubble away from Galle, Wasantha, 25, sits on his boat in Polhena. The boat lies in two pieces, he has no home and has lost his parents, his best friend and four brothers. But he is smiling and in high spirits. “No problem!” he exclaims. The phrase could be Sri Lanka’s unofficial motto.

Great blog I hope we can work to build a better health care system as we are in a major crisis and health insurance is a major aspect to many.

Won't you join my slaying tonight?

One Giant Prank for Mankind

Hunter doesn't use a rest